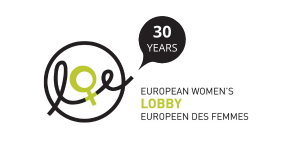 The European Women’s Lobby was created in response to a growing awareness of the need to defend women’s interests at European level since :

The scope of the European Union’s activities are continuosly extending and affect areas with a direct impact on women’s daily lives, particularly since the establishment of the internal market.
It became urgent for women and their organisations to participate in the programmes established by the Union and to get acquainted with European legislation affecting them.
The creation of such an organisation and its designation of lobbying also corresponds to the particular character of European-level decision-making process, which allows space for the creation of many organisations, founded to represent a wide range of interests and categories of women within civil society (including various economic sectors as well as trade unions, professional and social groupings).
These organisations were responding to a real need on the part of the European institutions. Contrary to received ideas, the number of European officials is rather low compared to national institutions . The institutions therefore often call on experts in the course of their work, due in particular to the need for taking into account the diversity of the Member States’ populations and legislations.
As decision-makers within the European institutions are not directly elected by the citizens (with the exception of the European Parliament) the creation of an organisation such as the EWL also corresponds to the need to bridge the democratic gap between the EU institutions and European citizens.

To lobby at European level and to provide information to decision-makers to ensure that women’s rights and needs as well as a gender perspective , are taken into account in the preparation of policies and legislation .
Promote their participation of women’s organisations at EU level and provide them with the information they need to do so.

The EWL thus plays a dual role as a link between women’s organisations and institutions. The EWL facilitates dialogue and exchanges between citizens and European decision-makers. Because of its advisory status in both the United Nations Economic and Social Council and the Council of Europe, the EWL plays an instrumental role at the international level.