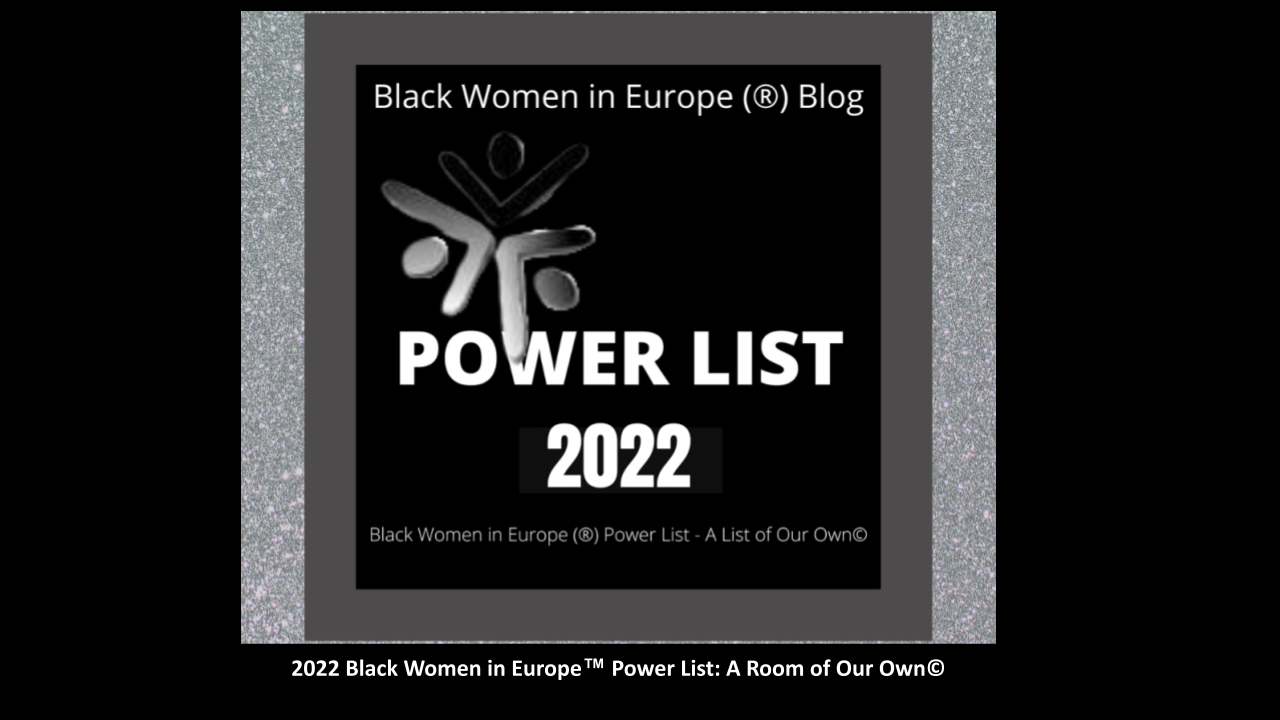 HALMSTAD, SWEDEN – Nov 2022 — The Black Women in Europe™ blog, created in 2006 by Adrianne George, released its 15th Black Women in Europe™: Power List 2022 – A List of Our Own©. This 13th year we feature 5 women as our blog celebrates our 16th anniversary. The awardees are in the following categories: Entrepreneurship, The Arts, Culture & Community, and Human Rights.

“Our 16th year of blogging amazes me,” George admits. “Looking back it sometimes feels like we started yesterday”.

In 2010 the Black Women in Europe™ Blog released its first Power List naming 58 women across Europe in 6 categories. Over the last 13 years, over 184 women have been included on the Black Women in Europe™: Power List  – A List of Our Own©. It was the first and remains the only one of its kind that celebrates the achievement of black women across Europe. This year marks the first time that three women have been named twice in two different years.

The previous lists combined have received well over 360,500 views on Slideshare and are presented in alphabetical order. They are intended to acknowledge powerful black women in Europe and to inspire others to reach their full potential. The lists do not aim to assess rank but rather to showcase influential women who, in some cases are well-known and in others, are women who should be known.

This is the 9th year the list contains a call to action to join the Black Women in Europe™ Kiva Lending Team which has 12 members. It is the 7th year that the Power List is dedicated to Derek McCullough, former List creative director, who died in 2015.

It's never too early to get your address up-to-date for future elections! Check out http://FVAP.gov for all of the absentee voting information and subscribe for important election reminders. https://public.govdelivery.com/accounts/USFVAP/subscribers/new #AmericansOverseas

Relocating as a federal employee overseas 🌊? Make sure you update your voter registration before you go! https://www.fvap.gov/fpca-privacy-notice #AmericansAbroad

You might not be able to find ranch dressing or sweet tea when studying abroad, but did you know you can still vote? Subscribe for tips and alerts 🚨 to keep you up-to-date on voting to-dos. https://public.govdelivery.com/accounts/USFVAP/subscribers/new #AmericansAbroad

Take our podcast with you during the holidays. We're great company to keep. Meet interesting women: a countess, actress, business leader, filmmaker, & much more. Perfect during your travels, while you cook or just hang out and relax. >> #bwie #blackwomen https://anchor.fm/bwie

Why I'm rooting even more for Meghan and Harry: When asked"what position" the prince was in when he asked Meghan to marry him. "Downward dog," he joked. Hillarious 😂 #laughtermakesitbetter #downwarddog
https://www.yahoo.com/entertainment/prince-harry-jokes-downward-dog-142746512.html?guccounter